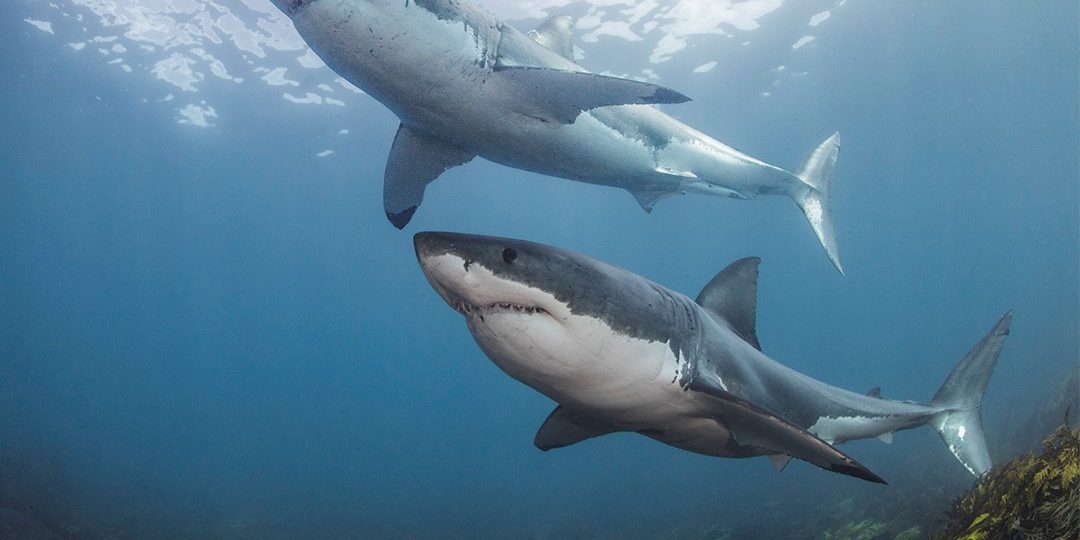 This remarkable photo was taken by my friend Chris Fallows.  You can listen to my interview with Chris about great whites on my shark podcast located at http://shark.libsyn.com. South African born, Chris Fallows is an expert on the great white Shark and their hunting habits. He has amassed the largest database of predatory events involving great white Sharks in False Bay and was the first member of the scientific community to observe their breaching behavior.

Chris was recently filming great whites for Shark Week in New Zealand and has made some unique observations.  The key surprise of New Zealand great white sharks is that they are abnormally comfortable at close proximity to one another. The currently accepted view is that great white Sharks, as apex predators of the mid and upper water column, are aloof and often lonesome, avoiding close contact with others. Normally, great white sharks resist being close to one another. Size hierarchy plays an important part in great white shark behavior and dominant sharks can scare off their brethren.  While this side of the coin is true, the other side reveals a remarkable sociability.

Over the course of ten days, Chris observed the individual sharks being very comfortable with each other. It was almost as if they were one big extended family, each knowing their own position in the hierarchy yet mingling at extremely close quarters.   Throughout his trip, great white sharks would swim comfortably side by side, almost as if they were enjoying each other’s company.

In this photo above, he watched as two great whites were literally piggy backed without either showing any signs of discomfort. Usually the shark that is above and has its vulnerable belly exposed quickly gives way or displays submissive body language, not here though. He took other photos where we could get four or five sharks together in the same frame. This iconic shark and wildlife imagery can be found at his website chrisfallows.com.

I wanted to highlight this photo because in my book, Emperors of the Deep- The Shark, I discuss the social aspects of sharks that scientists are uncovering. I have a chapter devoted to the social lives of sharks as, for example, uncovered in a study of lemon sharks in the Bahamas.  The evidence is mounting  that we need to recognize that sharks possess a sociability that we are only beginning to appreciate.